All That You Needed To Know About Thiophosgene

Home › Blog › Chemical › All That You Needed To Know About Thiophosgene 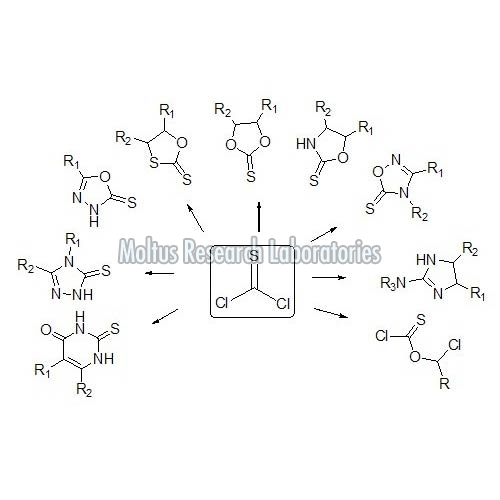 Thiophosgene is a compound that has a very short life. The compound has a broad gamut of reactions with different functional groups. This compound is used by the pharmaceutical industry for a number of reasons.

One reason is that the hydrolyzation of the compound is very slow compared to its oxygen analogue. But this rate is enough to eradicate the mutagenic activity of the bacteria Salmonella typhimurium with the solvent dimethyl sulfoxide.

Thiophosgene is a reddish coloured liquid that has the chemical formula CSCl2. The molecule of the compound is trigonal planar. It has a very persistent smell. The odour is very choking by nature. The compound is so very dangerous that when inhaled it can cause choking and irritation.

When mixed with water it dissolves in it very fast and decomposes. It is also soluble in other polar solvents that are organic in nature. Apart from these solvents it also mixes in amines and alcohol. It can also be dissolved in ethanol and ethyl ether.

The compound is capable of corroding metals when they come in contact with moisture.

As already mentioned one must be very careful of the chemical because when it comes in contact with the skin it can cause irritation and even burn the skin. It must be kept far away from the eyes or else they will burn if they come close. This happens because of the corrosive nature of the compound.

When inhaled, it will cause difficulty in breathing because it affects the nose and throat. The lungs get affected by the inhalation of the compound. And when inhaled in excess quantities, it will allow the buildup of fluids in the lungs known as pulmonary oedema. In such cases, the person needs hospitalization because of shortness of breath.

In case the compound spills over then all the persons in the vicinity must be evacuated on an emergency basis. And people involved in the evacuation process must be in safety gear. Then the compound can be absorbed using vermiculite, dry sand earth or like materials that must then be collected in sealed containers before disposing of.

In the second step, it is distilled with steam to separate the trichloromethanesulfenyl chloride which again hydrolyzes the sulfur monochloride. This reduction produces the compound thiophosgene.

The compound is used in the preparation of inorganic complexes. It also is used in the conversion of thioureas, phenols and thioamides to urea, thiophenol and amides in order of their sequence. When thiophosgene is reacted with dienes and alkenes, they give compounds that are bridged and also various reactive synthons.

Where Can You Find Thiophosgene?

There are many Thiophosgene Manufacturers in India who can supply the superior grade of the compound because of the superior infrastructure that they have. They are genuine manufacturers who can give the best materials.

This entry was posted on March, 03, 2022 at 17 : 45 pm and is filed under Chemical. You can follow any responses to this entry through the RSS 2.0 feed. You can leave a response from your own site.